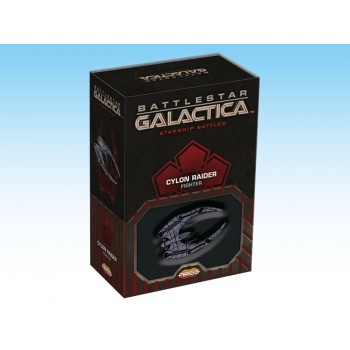 The Raider is the primary Cylon assault craft, first encountered during the destruction of the Twelve Colonies. The ship is actually a bio–mechanical, self–aware living creature, with a complex system of organs, veins and biological fluids inside its main body.

The Cylon Raider is armed with two kinetic energy guns, and it may sometimes carry conventional and nuclear missiles. Capable of FTL jumps, Raiders are also very maneuverable and hard to keep in sight for more than a few seconds.

After shooting down this Raider, Kara “Starbuck” Thrace captured and flew it back to the Galactica, adding her callsign under the wings with adhesive tape. This pack includes her pilot and skill cards, and the ship cards to play the model as either Colonial or Cylon ship.

Like other Cylons, Raiders can be resurrected, so they can continue developing their skills after being destroyed. This Raider, nicknamed Scar by the Colonials, is possibly the most vicious and experienced opponent encountered.

Each Battlestar Galactica — Spaceship Pack is a ready–to–play model, painted and assembled.