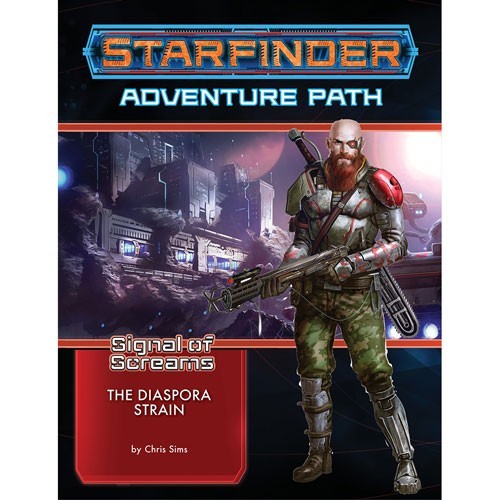 While relaxing on a posh asteroid resort, the heroes are beset by a plague of madness and horrible transformations and, after dealing with its unfortunate victims, learn these tragedies are part of plot engineered by an insane scientist trapped on the Shadow Plane. Using the funding of an amoral corporation, the scientist has crafted a mysterious signal that will spread pain from world to world. As this corruption begins to infect the heroes, they must stop the transmission at its source to save themselves?and the rest of the galaxy!

The Diaspora Strain (1 of 3): A vacation on New Elysium, a luxury resort located on an asteroid in the Diaspora, goes horribly wrong as the facilities malfunction and the guests and staff turn violent. The heroes must protect themselves and aid those who have remained sane, including a wealthy android tech entrepreneur who might have some information about the cause of this madness?if he can be rescured from the old mining tunnels below the resort. The heroes must find a way to stop the growing delirium, even if it means going through the guests?including a celebrated champion of the vicious sport of brutaris?who have been transformed into hideous abominations!